Also, I’m baffled on her story she just announced how she’s going to “start booking for photography” and she’s “looking at pricing to make it affordable.” I understand everyone starts from somewhere, but damn you’ll have to be dumb to get pictures taken by her. Maybe one of you guys lives in Cali, and can book a “shoot” with her and tell us how it goes.

She went from free sessions to practice to paid without doing anything lol.

This was my exact first thought. Practicing photographers do it for freeeeeee for a whiiiiiile before they start charging/making it a business. Lmaoooo

You also need to sign a contract for liability , rights, etc. I’m pretty sure she doesn’t have any of this on lock. She’s probably going to make people come to her. News flash — you have to drive to people too. None of this matters because she has 0 follow through.

And yeah, where are your pics from taking pictures of your passion, Kimbo?? She doesn’t post shit. She’s already proven she’s awful at PS! People who have a passion for photography are out taking pictures of everything and anything. She’s just trying to use the little visibility she has to gain the system for a buck.

In her next Q&A we need to ask “how come Carlos stopped doing YT?” Lol I cant with this slug. Ugh!
Top

you guys are hitting the nail right on the head.

I too cringed when she said she might photograph weddings. you have NO experience with any type of photography and no portfolio, yet you're thinking of possibly ruining someone's most important day of their life with shit photos? even more, if anyone does book her for their wedding, they're out of their fuckin mind. she also mentioned possibly taking baby photos... another hard photoshoot because you have to be patient with babies yet move quickly because babies don't pose or follow directions and move around a lot.

This lunatic needs to pick a type of photography and focus on it to perfect her skills instead of "possibly" jumping all over the place especially when she knows nothing about anything. She has no portfolio so brainless subscribers will be paying and booking with her out of pure 'trust.' (During her live mukbang, some subscribers were sending her money for no reason whatsoever which i feel is ridiculous because this sack of potatoes already has money so why are you (who is most likely less well off than her) sending her money as she just sits there and shoves food down her throat?)

and as someone else said, how the hell are you advertising YOUR photography business with photos that SOMEONE ELSE took?
Top I’m sick in bed with nothing better to do, so I emailed her for a ‘quote’

Reminds me of youtubers who think they are MUAs just because they can put makeup on themselves lol. Even if she doesn't want to shoot strangers for free, the VERY LEAST she could do is take a few shots of friends or family for her portfolio.... but our dear kimbo can't even be bothered to do that.
Tbh I hope one of her subscribers books her, and then posts about it online when the photos turn out like crap
Top

Someone should ask her to define aperture, ISO, or white balance. Or ask her thoughts on the rule of thirds. I bet her motto will be, “We can photoshop our mistakes!”

Nursetina0518 wrote:I’m sick in bed with nothing better to do, so I emailed her for a ‘quote’ I for one would love to see the train wreck of photos to come if this amateur has the nerve to agree to do a difficult event like a wedding - the drama that would ensue would be hilarious.

But what would these idiots expect? You can’t even say she’s “fresh” because...she knows how to hold a camera and that’s it. And she knows how to hide her own fat. She knows fuck all about photographing others.
Top

she thinks she can just put a preset / filter over it and it will look cute. does she realize professional pics need better quality than insta posts? and where can I see her “work”????

I'd give it a month before she stops talking about her fertograffeeeee. She has zero follow through and her knowledge on anything related to photography is in the negatives. I work in marketing and attend photoshoots often; even my wedding photographer had a team of 5, including himself. She DOES NOT have what it takes.
Top

Can you guys imagine her trying to do a fast paced event like a wedding? Running around getting all different angles?

I have a friend who hired a photographer based on price and did no research into his work, and the guy came and shot a few pics during the ceremony and bailed after not even an hour of being there. The photos came out horrible and she was so mad that the pictures her family took came out better than the "professional" photographer's

I see no difference... 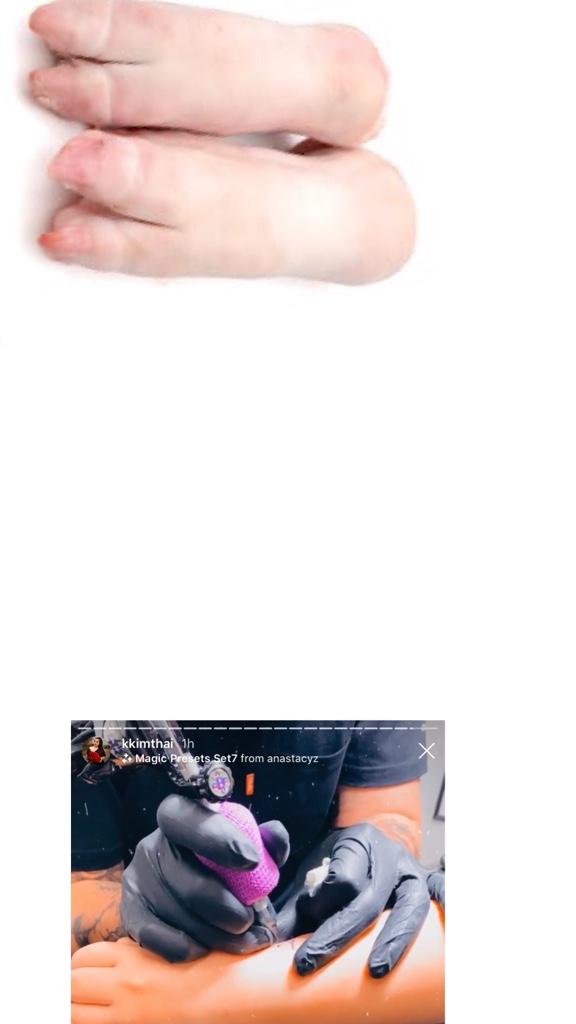 She might as well tattoo her sugar baby names as well “Carlos Ramos” since she has a thing for C.R. for her dogs.

allana wrote:that tattoo of her dogs names will look so bad in a few months probably already

That tattoo is going to look completely illegible in 1year's time.

Kim is the type of girl that wants tattoos but is afraid of the commitment so she gets super small ones all over instead of one nicely composed one in a well thought out placement. It's annoying.


I may be Canadian, but I can be snarky as hell.
Top

Why is this tub of lard acting like she actually cooked anything? She's like "i had to ask my mom for the recipe" when literally all she did was rub vietnamese seasoning salt on meat and then grill it. There is no recipe.

same with the octopus, she just covered it with sauce from a jar and threw it in the oven. that's not cooking...

i hate how she eats with her hands.
Top

I'm sorry but I laughed so hard when she showed the picture of her tattoo. She said when she announced that she was getting it, "I'm getting all four dogs tattooed on me." She didn't say their NAMES! I should've known she'd never sit through 4 portraits lmao
Top Which one of you CA fonts is gonna jump on the grenade and hire her photography?
Top

allana wrote:that tattoo of her dogs names will look so bad in a few months probably already

Lmaoooo if the editing of this video is indicative of her fer-tog-reffry skills people be in fer a ser-prise! The lighting and filter she had over the beginning was awful! And she hung on shots for waaayyyy toooooo loooongggg. Like, let’s go we get it. She made you sit through an entire minute of her putting all 5lbs of pork in the bowl. Like, seriously?! Learn

Then mixing it all with the salt with her pig hoof was disgusting to watch. If you were looking for ingredients you’re shit out of luck because she put it in Teeny tiny white font at different points on the screen, completely inconsistent, and hard to read. It was laughable!

Watching her eat that overcooked pork was so difficult, I had to shut it off. She was tearing and pulling the meat because you could see it wasn’t juicy and was overcooked. Gross. That’s not cooking.

Also, did anyone else question her story when she said her mom, who is vegetarian btw, was in the market and saw the pork and said “oh I just had to get some!” And that’s how this recipe was born??? Is that how it happened, Kimbo?

she changed her story several times within the actual telling it was so funny. Kim can’t keep up with herself.
Top

Delet This wrote:Which one of you CA fonts is gonna jump on the grenade and hire her photography?

Better yet, hire her for an ENGAGEMENT photo shoot and see her grumble the whole time about how Carlos hasn't proposed
Top She's such an air head taking pics of all 4 dogs in that apartment so I figured I'd save it if she tried deleting it.

It's so creepy that she got 2 dogs, Rocky and Riley, just because they have a first name beginning with R so it matches with her fat lazy bf Carlos Ramos. I didn't even think about that until a font mentioned it. She's creepy and weird AF 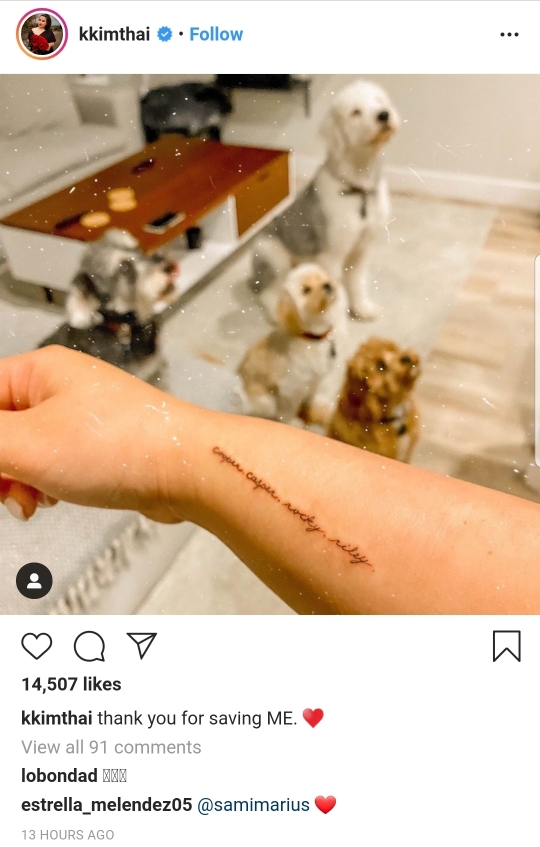 PMS should just be called ovary-acting. That photo is so unnatural with the dogs all looking up like that in similar pose like they’re robots. I wouldn’t have chosen this to go up. More evidence of her fertography skills.
Top

That photo is so unnatural with the dogs all looking up like that in similar pose like they’re robots. I wouldn’t have chosen this to go up. More evidence of her fertography skills.

I’m surprised she didn’t post some stupid Valentines Day shit. Usually she’d be bragging about a date night at Maestros or some gift Carlos bought her and some dumb gift she got for Michelle.
Top

What the hell is a “font” in this context? I’ve never heard this term before!

That photo is so unnatural with the dogs all looking up like that in similar pose like they’re robots. I wouldn’t have chosen this to go up. More evidence of her fertography skills.

What exactly did her dogs save her from? I agree on the picture looking unnatural; another forced photo