its katelyn bro wrote:Past 9pm where she lives aka almost day 4 and she still only has day 1 up


I know! I was just scrolling thru YT bc I got a notification of something I wanted to watch. Once I was done I noticed still no day two or three! P A T H E T I C. what’s so funny is I follow another girl whose a registered dental hygienist and works 12 hour shifts and that girl already has up all 3 of her days of vlogmas....and has done so previous holidays as well. All on time. So whats MegaCunts excuse???? She literally does jack shit all day.

do you mind sharing who that youtuber is? i love to subscribe to people who have actual jobs outside of youtube. you can only watch so many who sit on the couch all day & wonder why “they don’t feel like themselves”

But of course after mentioning it, now that I scroll thru YT I don’t see yet where she’s posted day 4 (lol) and she’s on the east coast so it’s almost 9pm here

but anyways, she’s usually very good abt it. And still she’s 100x more consistent than MegaCunt any day. And actually has a good career and steady fulfilling job it seems. None of which miserable cow Meg has or will ever have. jwyn1 wrote: ↑
Wed Dec 04, 2019 3:25 pm
I truly hope she has the worst birth experience. (I am hoping the baby and her are healthy and ok. I’m not that bad of a person) I’m hoping she has to feel the contractions and comes too late for an epidural. Or gets torn and has to be stitched. I had an emergency c-section and was miserable afterwards but I still had to move and take care of my son because my husband had to go back to work almost immediately. She is in for the rudest awakening from her fantasy mom life.

Girl same. I feel like no matter how bad or how good her delivery goes she will make it out to be like she had the worst birth experience that any mother on planet earth has ever had.

I wonder if she will upload a birth vlog? Part of me thinks yes but I don’t think she will want to show any of the parts of her pushing with her legs spread open. She’s too much of a prude. Then again maybe she won’t care and will show her blurred out vagina. Lord help us.
Top

I rarely post, but oh my goodness. She is pregnant and has a stuffy nose but acts like she is literally dying. How hard is it to edit and upload videos? She lays on the couch all day and could be so much more productive. Tomorrow is “Vlogcember” day five and still no mention of day two. This girl kills me. Meg this is your JOB. There are countless pregnant women with rhinitis working 40+ hours a week. What a loser
Top I didn’t think she was mentally ill until I sawl the miscarriage video. She is fruit loops. I think she thinks a baby will make Ant stay lol.. maybe she’s been afraid he’d go back to Maria this whole time and she needed a baby to compete.
Top

I 100% think she’s going to have a C section. She’s way too much of a prude to spread her vagina open in front of a bunch of people. She barely does it for her husband. Plus she’s too full of herself to go through vaginal birth and she makes impulse decisions without worrying about the repercussions. C section recovery is much worse but she won’t care in the moment.

Ugh I feel so bad for this poor kid. This is going to be an absolute shit show. Maybe Erin and Andrew can adopt their nephew after rat flees the nest and Megan gets shipped off to a mental hospital
Top

She finally has her “vlog” up it doesn’t even say vlogcember! I guess she gave up with the title!! LMAOOO Off topic but I’m finally catching up. I’m looking forward to when she’s back dressing like a grandmawl, really getting grossed out seeing her massive hooha on my screen 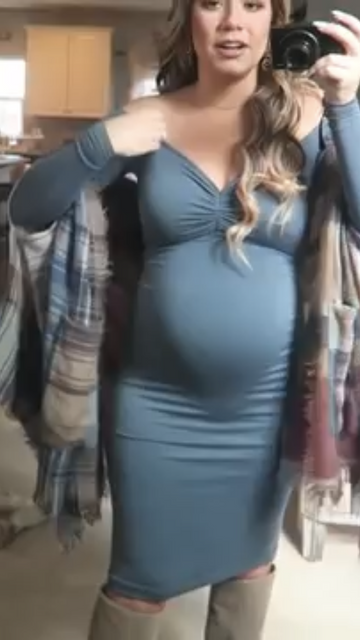 DAMN DAMN DAMN. This MegaCunt uploaded a video and the first part of her title really says “Pregnancy Rhinitis” like everyone on this earth doesn’t know what the fuck it is a this point
If you don’t get it, I feel sorry for you.
Top

Omg if I hear the word rhinitis one more time in my life I’m gonna explode. It’s every other word out of her mouth. I can’t. And why tf is this vlog almost 40 minutes. No one wants to watch her complain for that long. Dios Mio.

seriously and she also added preemie clothes to her registry a few months ago. do most expecting mothers prepare for that?
Top

I’m so done with this girl...she’s been using nasal decongestant sprays and even though her OB told her to STOP using it she refuses to quit. Instead she’s going to her primary care doctor to ask for steroids or more antibiotics.

What she finally called Jade her sister In Law??? Shocking!!

i’m at the part where she’s complaining yet again about the rhinitis and she says she made it worse for herself because she wanted the quick fix of using nasal sprays against what her doctor said & needs to quit and go cold turkey but she can’t stop- so whoever said she’s impulsive without caring about the consequences, spot on.

now that bella’s gone she wants to decorate, of course she’s not too tired now
Top

MyDunkinOdor wrote: ↑
Wed Dec 04, 2019 7:33 pm
i’m at the part where she’s complaining yet again about the rhinitis and she says she made it worse for herself because she wanted the quick fix of using nasal sprays against what her doctor said & needs to quit and go cold turkey but she can’t stop- so whoever said she’s impulsive without caring about the consequences, spot on.

now that bella’s gone she wants to decorate, of course she’s not too tired now


I truly don’t understand how she is incapable of just... not using them. Has she been doing cocaine this whole time?
Top

She put up her Christmas dAyCoR two days after Bella leaving. She still hadn't put away all her baby shower gifts by that point, which was the excuse as to why she couldn't do it while Bella was there. What a cxxt.
Top

So let me get this straight

SHE DOESNT WANT PITY AND SHE DOESNT WANT ADVICE! SO WHY THE EFF ARE PUTTING IT ON THE VIDEO OR ASKING ON INSTAGRAM! You need help! She got so defensive when she said she didn’t want pity or advice??? You’re putting your life up for the world to see! You know that’s exactly what you’re going to get. Smeg needs to get off the internet because she is not in a good metal place right now.

Her newest vlogmas made me depressed just watching her!!!!!
Top

YOOOOOOOOO her actions really speak louder than words huh. Now that Bella is gone, you all of a sudden got a burst of energy?!

MEGACUNT AT IT AGAIN BECAUSE SHE WANTS THE ATTENTION ON HERSELF AND BUBBAS, NOT RATONY’S FIRST FAMILY
If you don’t get it, I feel sorry for you.
Top

Meg: I’m gonna see if my doctor will give me steroids or antibiotics

Also meg: I think this is one of those things you have to just deal with.
Top Her minions praise her over the most ridiculous things. Women work 9-5 jobs while pregnant. All she does s sit at home and go to homegoods.
You do not have the required permissions to view the files attached to this post.
"I feel like this year is really about like the year of just realizing stuff" ~Kylie Jenner

I wish she would just go talk to her doctor! I don’t want to see her complain if she’s not going to see a professional. Don’t just go by what your subscribers are telling you!
Top

Greighson looking at her like
“Bitch enough with this shit”
You do not have the required permissions to view the files attached to this post.
If you don’t get it, I feel sorry for you.
Top

So your doctor tells you you’re actively making your situation worse...so instead of quitting and being a mouth breather for a few days, you’re prolonging your struggle for temporary relief? And because you didn’t hear what you wanted you’re going to your PCP...like he’s really gonna tell you any different?