Thank you to LDUBB for the title!

I've been watching Courtney's story wondering how many crystals her and Mike are pocketing at this event. If you listen, you can hear Mike bullshitting with random people as if he actually cares about crystals - probably to help distract the vendors from watching Courtney shove stuff in her pockets!!!
Top Omg thanks for the new thread name! rofl

She will steal everything that she can because they need that cash that she had for the event.
Obviously, Mike’s concussion isn’t too bad because he is talking to a lot of vendors. I guess the
physicians told the grifters they didn’t have a case.

I wonder if Mike knows that Courtney opened a credit card in his name. Is she going to be able
to make minimum payments to keep him from finding out?
Top

I doubt they even went to the doctor like she said they were going to. She seemed to drop the whole "he has a concussion" thing real quick. I wonder if people messaged her and told her it's not a good idea to lie about that shit lol
Top

The two of them are not the brightest bulbs in bunch. They also don’t seem to go on regular vacations where they
would learn how to act. However, anybody knows to go to the front desk and see if you can stay another night. I
have never had a problem with that. I think they are both drug addled and just don’t think things through. They
need to straighten themselves up. Especially old WTC. Get out in the world. Learn things!
Top

hahaha today she was showing off the rings she got at the show and said something like "Still waitin' on that one for my left hand, though. Still waiting..." and panned over to Mike and he looked SO over it

Why would he give her a ring? He has found out that she is useless as a stay at home mom.
She can’t stop using or smoking around his kids. I am suprised that he hasn’t left yet.
Top

How long is Courtney going to wait for her ring?
She been screeching about that forever.

I don't think she actually wants to get married, because then they would lose whatever government help they're getting!
Top The title for this thread fits Courtney perfectly! I love it!

Mike sure is enjoying that crystal show right after that bad head on collision car accident he suffered from last week? I would love to see the bruise on his head where he hit that windshield & supposedly has concussion? Courtney probably walked through that crystal show shoving as many crystals in her pockets as she could get her trashy hands on. That post Courtney made about her being hot & bothered is disgusting! She really has no self worth or respect for herself or anyone. I would never post about my sex life with my husband on social media because that's my personal business. Courtney feels like it makes her look so awesome because she has to rent hotels like a cheap stripper to have sex with her boyfriend. That's not normal. Courtney is out her buying $10 Lush bath bombs to use them in a cheap hotel room for monthly sex night. I buy $10 Lush bath bombs to enjoy them in the privacy of my own home after a long week of work, children & taking care of my home!

I also wanted to touch on that car accident that Mike was in that Courtney is claiming is not Mike's fault.

1. I don't believe for one minute that Mike isn't the cause of that accident till I see the police report saying it's the other drivers fault.

3. That car accident looks as if both were at fault if anything! Looking at both cars just from the video Courtney posted to her stories looks as if both were merging into a turning lane at the same time in traffic & someone wasn't paying attention. It hit on both driver side front tires not head on. Or one of the 2 was making a left turn (Mike I believe was turning left at a high speed) crossing over into the right lane & from the look of her car the wheel is straight still on her car & Mike's is off meaning the tire may have been in a turning position. It looks as if her car was either stopped or going very slow & Mike was the one driving fast & erratic. If you look at the photos you can see her car was hit with force like hit with another car. Mike's car literally looks like he hit something. Just from those few photos & videos Courtney posted I can almost be sure Mike is at fault for that wreck. I would about put money on it because that's how sure I am about it! 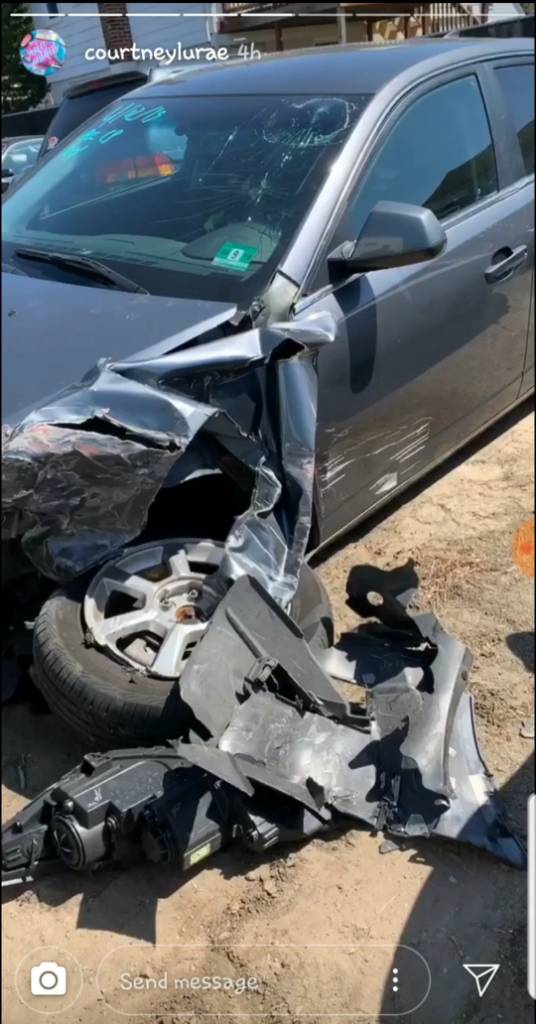 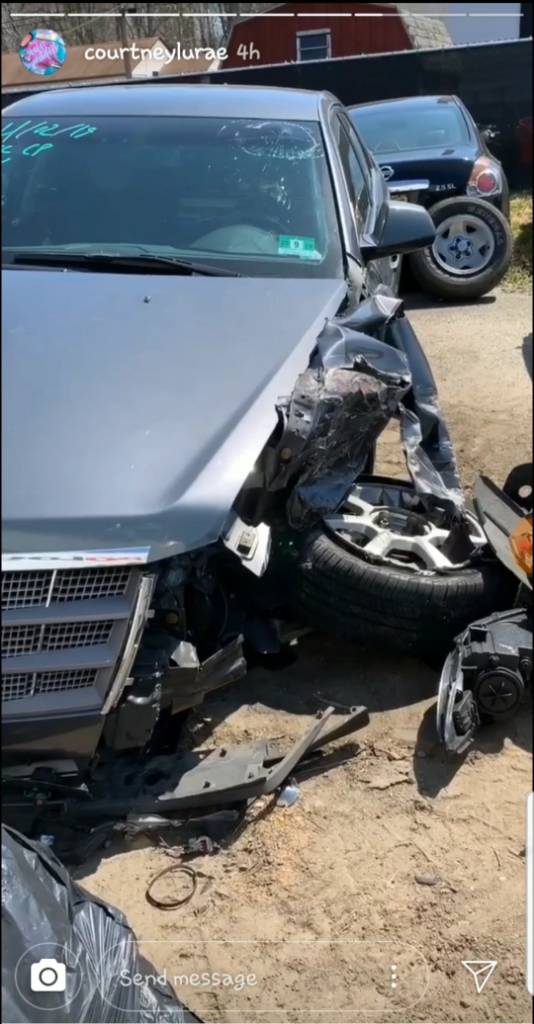 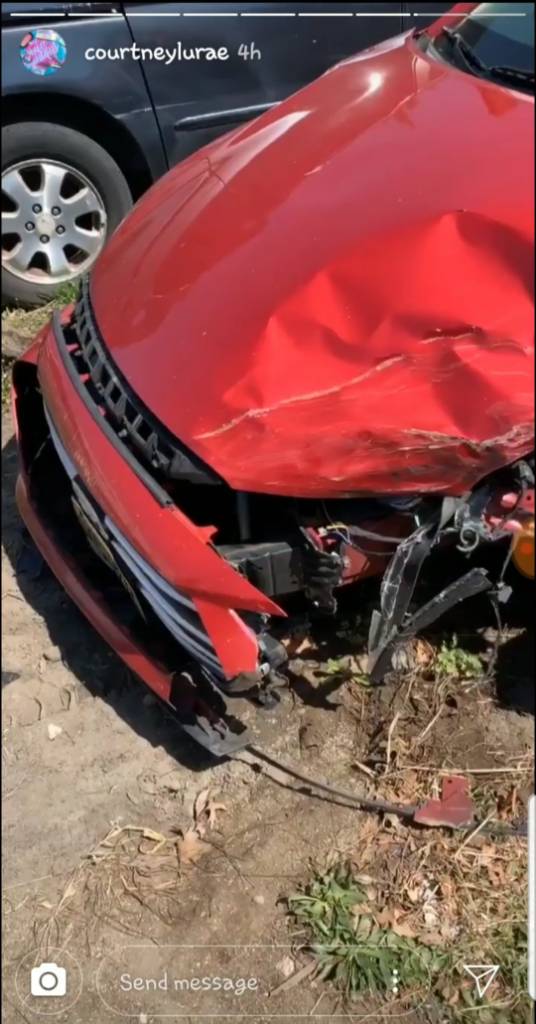 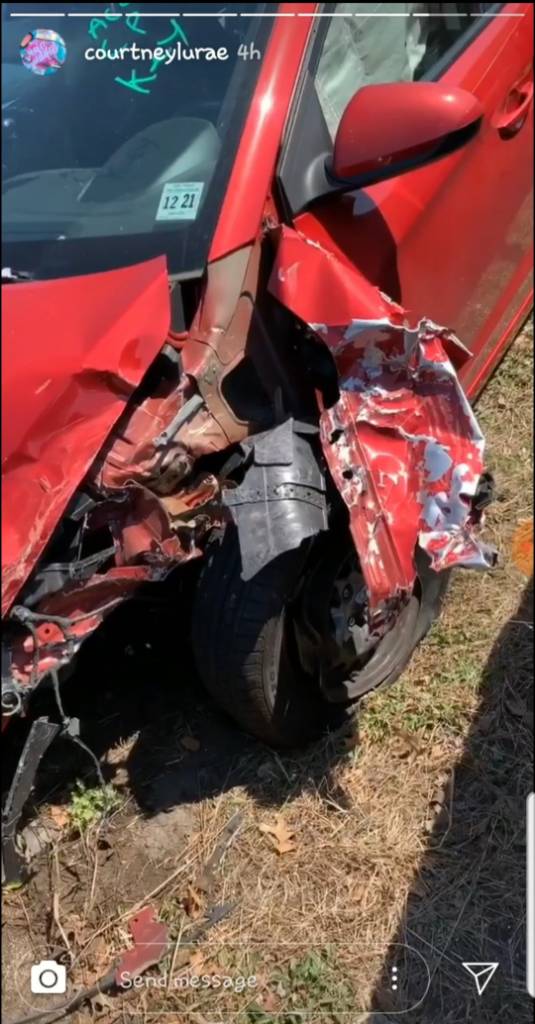 Yeah, the more you look at it - like, his tire came off but the girl's tire came off AND THEN SOME lol. Her car is by far more messed up than his is. Either way, it was no head-on collision like Courtney claims. If she wanted to keep up that act, she shouldn't have shown the cars.

Now all she's doing is complaining about how the nail salon fucked up her nails and the rhinestones keep falling off, blah blah blah. She's most likely trying to get a free set out of this nail tech.
Top

I wish she would shut up about those nails.

It doesn’t matter what she gets done, she’s never satisfied. Those rhinestones were cheap looking anyway.
Maybe she should go to work and try to make the customer happy. I would pay money to watch her do that.

Show your haul and shut up about the nails. Or don’t show your haul. Honestly, we don’t care anyway.
Top

You can't get rhinestones all over your nails and expect them to last for weeks. They fall off no matter what, unless you're getting them totally encapsulated in the gel (which she was going to bitch about anyway because it made them look like "globs") lmao. Maybe she realized that she paid too much for them after all!
Top

Courtney paid way to much for those acrylic nails with a gel over lay! I'm sure her nail tech used nail glue to hold the rhinestones in place? Then Courtney went back because they were falling off. So I'm more then positive the nail tech used more nail glue & put gel over the top to make them stick & from my experience that's a big nail Technician no no! When I lay rhinestones I us clear acrylic as a binder for my rhinestones. They hold for well over 2 weeks. I never lay gel over the top because it takes away from the effect of the rhinestones. Courtney must be going to a nail technician who just got their certificate. I can tell because Courtney's nails look very cheaply done. & for the simple fact whoever does Courtney's nail put gel over the top of her rhinestones!

It honestly looks like she had someone do it in their house. I truly hope she didn't actually pay as much as she said it cost!
Top

She's back to whining about Mike's accident again! Now their insurance company is "screwing them" and these are "bad times." Maybe you shouldn't have spent so much money on rocks last weekend? For crying out loud, if she's going to complain that their insurance is going up, of COURSE it is. She just got in an accident not long ago and now he did. She thinks she's going to get a new car paid for out of this and someone needs to tell her it's just not gonna happen lmao. She looks so stupid whining about this now and trying to play "poor me, we cant afford this" after all that spending and last weekends bullshit.
Top

How many times have I said she’s not the smartest?

Their insurance should go up a lot. Like you said LP she was in a wreck and now he was in one. They are lucky that their
insurance is considering continuing to carry them as neither of them are considered good drivers in their insurance company’s
eyes.

There is no way they will get a new car unless Mike pays the difference between the car he drove and a new car.

Keep whining WTC. It is so fun seeing how dumb you are.

I think her problem is that she's seeing they can't afford another car payment and Mike is going to have to take her precious "truck" to work. If he's even back to work yet (don't know why he wouldn't be, there's nothing wrong with him). So God forbid she won't be able to go out stealing (when she actually drags herself out of her robe) during the week!
Top

Any other person would have said forget about my bday this year, getting a new car is more important. Not Courtney! Blows money on rocks, trashy hotels, makeup, stuffed animals and says mama deserves it. How incredibly selfish and immature!
Top

And her birthday's not even until May, so I guarantee you there will be some other haul once it actually is her birthday! You can piss and moan to the insurance company all you want, they're not going to buy you a brand new car Courtney lmao. Also, they're not even going to want to listen to your loud mouth because you didn't witness the accident!
Top

That's just the thing. They're not married and it's all in his name. The insurance company wouldn't talk to her -period. She's fighting nothing but the frustration of not being able to put her lying ass 2 cents in.
Top

I was going to bring that up but wasn't sure - I assumed both cars were in his name, which must have already made the insurance go up because of that accident that she got into lol.
Top
Post Reply
856 posts