No this is just disgusting. No one jokes about raping children ever. Why would someone do that unless they are a pedophile. Then he goes on to joke about sex with his animals. People just don’t do that. No one just makes up child sex jokes. You are a pedophike if you sit around, and think of that shit.
Top

He’s gross, and everything he does is fake. His fake laugh, and snort. His fake concerned looks. Every single thing is exaggerated, and fake. I do think he’s a pedophile with the rest of the freaks who sit online, and post thousands of jokes about it. It’s really sick.
Top

It's hilarious to me that he chooses this moment, at the top of his game, to address the whole cat thing

As if people haven't been "calling him out" on it for years already? When he has everything to lose, he brings it up to save his ass. I wonder where the logic is there. Then again, more to lose means more people are ready to "cancel" him lol.

I guess not everyone has been reading the forum threads for years but I know for a fact that Shane has. He had every opportunity to say it wasn't true at the time.

I don't believe and never believed the cat story, by the way. I'm not defending him by saying that, just saying what I think and I still think he's an idiot for ever making up that story without a "just kidding" to begin with.

What I can say, though, is that the tweets that he posted after have been the highlight of my week. It's hilarious, comedy gold, something he can only achieve when it's unintentional.
Top

I am wondering that did stuff just come out now in huge prominence because the palette is launching anytime soon and they want publicity amd traction.
Top

^ Yeah, I was thinking about that - What if this is all drama created to be put into the videos with Jeffree? Extra content where they talk about and address the drama, to have Jeffree get fake upset for a little bit then say he's learnt his lesson and they're continuing with the palette
Top

“Poor me it never gets easier” bitch it shouldn’t, you’ve done dozens of extremely fucked up things. I hope Shane actually does get cancelled because there’s no justification.
Top

I just think it’s such bullshit that his fans are now saying shit like “it was a joke” “it was a long time ago” “cancel culture is terrible!!” Like they weren’t the ones to jump on the bandwagon of hating on Laura Lee and Manny and just about anyone that said one bad thing in the past.

But because it’s Shane!! It’s fucking okay!! I just don’t understand these people omg, do you hate bringing up the past or not?

I swear Shane could kill someone, show everyone the evidence and his fans would still find a way to excuse it

Shane: *describes an incredibly detailed story about raping his cat. includes how old he was when he did it and how. doesn’t say he was kidding or attempts to pretend there was any humour in the story*

Shane: omg guys it was a joOooOoOoOoOoOoOke
Top

My social media sphere usually has no overlap with Shane at all, and yet it seems like my entire twitter tl has been non stop mocking him all morning. His denial tweet is like goddamn performance art.

Sorry Shane, but to the rest of the internet you will forever be "that youtube catfucker guy" and there ain't a damn thing you can do about it lol
Top

PiinkFart wrote: ↑
Mon Mar 18, 2019 6:14 am
Shane: *describes an incredibly detailed story about raping his cat. includes how old he was when he did it and how. doesn’t say he was kidding or attempts to pretend there was any humour in the story*

Shane: omg guys it was a joOooOoOoOoOoOoOke

Even if he didn't physically do it, but just thought about it then talked about it, all I imagine is some other gross guy hearing this story and thinking it would be a good thing to try. I actually feel sick to my stomach right now thinking about it, and I'm not exaggerating.

Plus, this story has made it to mainstream media- I was just over on E Online looking at something else, and in the sidebar was a story about this! It made Shane sound really bad. Once a YouTuber story leaves Twitter and makes it onto the mainstream, things tend to escalate. Business people tend to get concerned at that point.

I, for one, am done with Shane and his whole gang of excusers. I can never look at him again in his gross bathrobe without thinking about this, and even though he thinks this is "old news," it is not to people who only found him recently following one of his "series," and these people aren't going to stick around for this.
Top

What if... someone brought this old podcast up to create a new twitter uproar to take the attention away from the pewdiepie/terrorist situation.
*dramatic horror movie music*

Ohhh my god i’d forgotten about the cat thing. I knew there were more reasons i disliked him.

Has Jeffree like.. said anything? This could affect his ”brand” if people get upset about J* supporting a pedophile/cat abuser??
Also every damn person has been tweeting defending or supportive tweets @ shane, like ”i know shane, he’s amazing and would never do this!!!” etc. But nothing from J*? Hmmm
Constantly Confused

[english is not my first language]
Top

Also off the current topic but i just watched Morgans video with Shane where he follows her make up routine.
As someone who up until 2 years ago put foundation on with my fingers and owned like 4 brushes, how is Shane technique? I’ve seen his Looks and they’re clearly awful. What i’m curious about is if he’s putting on make up “correctly”, like if he is using the right brushes and if he has the techniques down or not??
Like the results ain’t good, dear lord. But how’s the application and stuff?
Constantly Confused

[english is not my first language]
Top 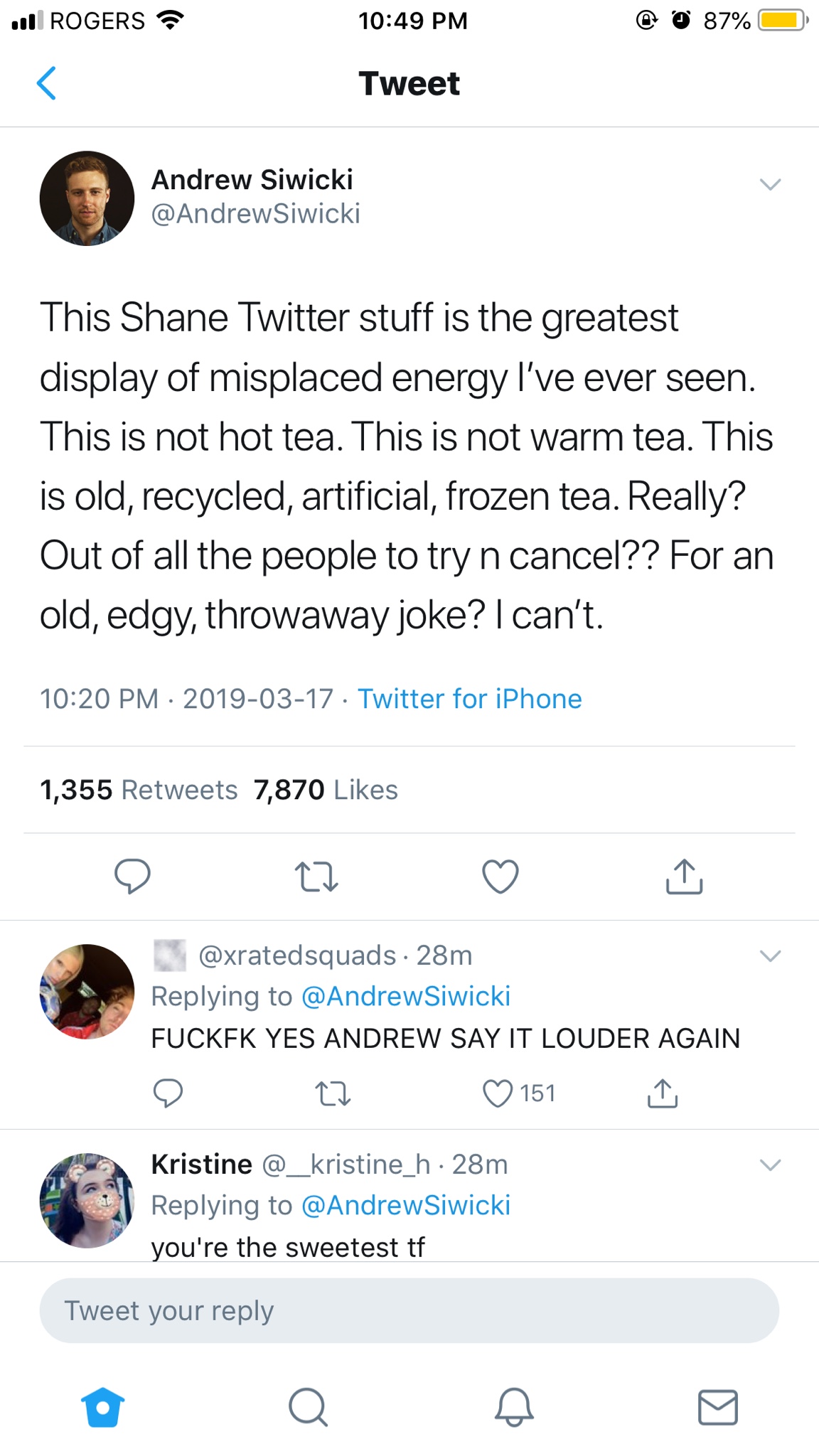 Lmao who tf does Andrew think he is? Thanks for speaking over everyone Andrew. Who are you again? Shane’s amateur cameraman and his personal assistant?

Lmao no way Shane didn’t write this tweet himself
Top

What is the twitter drama? I’ve been at Disney for a week, lol.

FashCandyxx wrote: ↑
Mon Mar 18, 2019 5:33 am
I am wondering that did stuff just come out now in huge prominence because the palette is launching anytime soon and they want publicity amd traction.

I don't think this is the type of publicity Shane would want for his upcoming palette collab. I'm pretty sure he only addressed it because it was like #1 trending on twitter and he probably felt like he HAD to since it was what everyone was talking about and sharing. Shane's the type of person to only address a controversy that blatantly true if enough people are talking about it. All the other times likely didn't surmount to this much attention and he has more to risk this time around.

I can't believe some of his fans actually believe that bs response that it was "all a joke" when there was no jokes being thrown in that podcast?! He literally starts the convo with "The things I've done to my poor animals" ...... He's describing a real scenario in the past what a sack of putrid shit.
Top

The cat tweet is the funniest shit ever, especially without any context. I opened my Twitter a few hours ago and it was the first thing I saw (and I don’t even follow him). I legit lol’d.
Top

A heart as big as his talent, huh?

A few years ago I thought he would start to fizzle out by the time he was 30. Mainly, because his peak "attractive" years were at the start of his internet fame and he was slowly starting to age. Yet, he continues to dress as a teenager from the early 2000's when he was actually a teenager.

His fame really has only grown because he bought/ hired better camera people and editors and started to hang around influencers that are popular right now. The latter of which he has been doing since the beginning of his career. If Jeffree ever becomes irrelevant, Shane will distance himself in a heartbeat. While, he did just make a video with her (because he knew it would get views) Brittani Louise Taylor was the first example of this. Then Joey and Trisha. He doesn't keep people in his life.

Meanwhile, a video of him doing something gross and sexual could be released and his fans will still not care. They are young and impressionable and as soon as they grow up he finds a new group of moron children. He has been doing this since the beginning, which is why his content is unrecognizable from the beginning. Not because he got more mature and better at his "craft" but because he has no college education and more than likely just passed high school to get him out and could maybe live 10 years comfortably off his YT money, who knows after that though.

Like, I said in my previous post there is also a collab with Joey and possibly a Trisha and or Drew collab where he also discusses with a straight face having sex with the cat. The first podcast after coming out he tells Jesse he had to explore if he was into this that or kids. I can't remember the exact words but if you go and listen, you won't be able to defend him positively or negatively anymore. We live in a culture now apparently that a simple video response is all you need too make things better. I remember when Channel Awesome was being exposed last year. The fan response was that a letter no matter what it said was not good enough. A video would be sufficient though. Obviously, they never made that video but it's the same logic for Shane. All he has to do is sound offended and upset that he is being accused and he is free to continue to do and say stupid things. Especially, if he releases a new video about some obscure YouTuber that he can exploit for money.
Top

Can people stop acting like the cat story was told years ago? The podcast is from 2016/2017 people at what year am I allowed to hold Shane accountable? His age in his STORY was 19 but he very recently told the damn story as if it was still funny and cute.

People defending him don’t know what the FUCK theyre talking about and it’s infuriating. One tweet I saw in the tags was “true fans know shane didn’t have a cat when he was 19!” Really bitch?
Top
Locked
940 posts