she can't smell??!?! lmfao I had no idea, has she ever mentioned that before?

I think my favorite part about Allie's vlogs is when she messes up a word or sentence, pauses, and then re says it like she's going to edit out the mess up but she leaves both in.
Top I have to skip her intros because they drive me nuts. First of all, I hate this whole cutesy music-dancing-posing montage thing geared toward 11 year olds anyway, but when you add a 30 year old into the mix it just makes it that much more cringey.
Top - Everyone has mosquito's allie did you really have to mention a specific youtuber that also shares your annoyance with them?

- She's nasty for not washing those mulberries I have 3 mulberry trees and I wouldn't dare eat one without washing it first.

- The way she started off her rant was as though someone had just disrespected her when really it's because the festival ran out of icecream which is pretty understandable considering IT'S A FESTIVAL WITH A TON OF PEOPLE.

Off topic : I really want her to be in a relationship , but for my own pleasure so that I can see the awkwardness between her and a guy.
Top

Gcacie Morie wrote:she can't smell??!?! lmfao I had no idea, has she ever mentioned that before?

Yep, neither her or her mum could smell. There's some name for it, I just can't remember; I'm pretty sure it's harmless though. Does call into question why she would occassionally talk about perfumes and stuff though lol
RETIRED MODERATOR
Top

ayoozsalah wrote:- Everyone has mosquito's allie did you really have to mention a specific youtuber that also shares your annoyance with them?

Yeah, she does this all the time. She'll reference something totally normal that everyone does and be like "(insert teenage youtuber) does this totally normal, uninteresting thing, so I kind of feel like them right now because I'm doing it too!"
Top

I am a headache??

DipDipDipMyBlueShip wrote:I am a headache??

She sure is.
Top Was watching an old Vlogmas video and here at 4:45 she says "good thing our car heats up fast, which is the car I drive, I just don't drive and vlog because that's not very safe" Ugh that song in her new intro annoys me to end.

How many times did she want to say parade and ice cream in that vlog? Jeez

That whole bit about Ronald McDonald felt so forced.

Yes Allie, we know you have a cooler to put the mulberries in. There's no need to keep reminding us

She's going to use an eyeshadow as blush

She really fucked up the editing on the clips with the pen, wtf This is my first post in this forum but I have been watching her for about 2 years. I love this forum I read it almost everyday. Now is it just me or has she been getting even weirder as time goes by? She seems to be even more shady these day. Do you guys agree? that was the most depressing parade I've ever seen
Top

What I don't understand is she over-edits everything, but can't be bothered to cut out clips where she repeats herself 500 times? lmao don't get me wrong, it gives me a good laugh every time, but come on! You can't sit there watching it while you edit and not think "Hmm I should cut that out!"
Top

Her inability to smell is called anosmia. Allie is the only reason I know that. Sad for me really. I am way too invested in her sad existence.

DipDipDipMyBlueShip wrote:I am a headache??

She doesn't like McDonald's? They seem to go there an awful lot lmao. I thought she was there by herself, I didn't realize her dad went with her. He's trying to get away from her

I want to send this girl some concealer. She's got the worst eyebags, it's uncomfortable to watch her.

That's a cooler? To hold what, a single juice box?

How many fucking times was she going to talk about the cotton candy marker? Holy shit!
Top

LiddlePallid wrote:She doesn't like McDonald's? They seem to go there an awful lot lmao. I thought she was there by herself, I didn't realize her dad went with her. He's trying to get away from her

I want to send this girl some concealer. She's got the worst eyebags, it's uncomfortable to watch her.

That's a cooler? To hold what, a single juice box?

How many fucking times was she going to talk about the cotton candy marker? Holy shit! 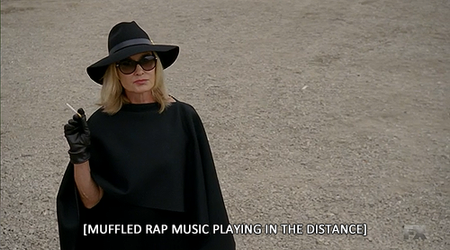 And she realllllyyy needs to stop being so rough on her face when she's washing it, touching it, and even applying makeup. 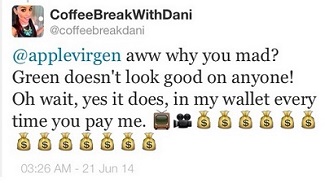 Omg her latest vlog was so annoying. Like usually I just find her amusing, but I almost couldn't make it through. She sounds SO winded the whole time because she literally talks a mile a minute. And of course she's repeating herself over and over. We get it you are picking berries of a tree, don't tell us 2000 times.

She's like Jimmy two times from goodfellas. Lol with saying everything two times or more.

"Did you all take stupid pills this morning?" credit given to Mr. Potato Head
Top why does this girl have to pose with every single object she holds??????????

Seriously modeling with the mulberries???

She needs to upload more vlogs!! Come on allie you're spending too much time thrifting for diseased swimsuits. What kind of parade was that

I'm gonna do a recap of her latest vlog since there's so much gold in it:

- I hate her highlights. They remind me of melted Reese cup swirls in chocolate ice cream. And it shows how greasy her hair gets. She just needs to go completely dark, it's what suits her best.

- her ice cream rant was probably the most childish thing. yeah, i completely understand the horrific disappointment of not having any ice cream because that's practically my diet, but the way she ranted was so childish. She has her moments when she acts like the world revolves around her.

- I agree with whoever said the Ronald McDonald bit was forced

Allie just tries way too hard to be.... "quirky", sometimes?

- 5:07 I laughed so hard when the firetruck blared because I imagined what it would be like if it had been held out the entire time she was talking.

- And there she is, trodding through the Disney makeup section. Of course......

- Allie why in the hell didn't you wash those berries? Think of how many birds and animals and insects have touched that and likely brushed poop or dirt onto them. You're asking for some serious gastroenteritis. AKA the shits n pukes.

- why is she going on about a marker? why did she buy only a single marker? maybe just a token of childhood reminiscence? idk.

- on the topic of that, a doodle scent marker? she literally told us she can't smell.

- i honestly don't think allie watches her own videos tbh i mean how can anyone skip over those large portions that need to be edited out?

- i want to send her eyebrow stencils.
Top BowCreeper needs to upload these fucking videos that she said she was gonna upload. This wait is so boring.