She is awfully fussy about how she styles her hair for such a mediocre result.


I may be Canadian, but I can be snarky as hell.
Top

There was a solid minute of her in the shower...why? Also her hair isn’t curly. It’s damaged. She’s so phony.
Top If she wouldn't have jumped on that Kat Von D bandwagon and decided to 'never' review J* again, her channel wouldn't have went down so fast. She was riding Stephanies dick so hard, and she kept mentioning how they live in the same city. Yet Stephanie would never be caught dead around Cora. She's way too vain and Cora would probably disgust her in person.
Good that she will be returning to school. You can tell when she talks she's not very educated. And she doesn't have any common sense. She'll never be a business owner. And I suspect her and the hubby have serious financial issues.
The reason I say she will never be a (successful) business owner is the fact that she's been on YT since 2008 and her videos still look like she is using a camera for the very first time. Her latest video, Beauty meets Party, has horrible sound. And her talking about the products she seems like such an amateur. She's reading a script and can't even talk straight. She should really study before filming. She seriously doesn't give a shit anymore. She should just turn her channel into a mukbang/sit on the couch like a sloth channel.
Top

Is she serious with this "makeover" holy shit 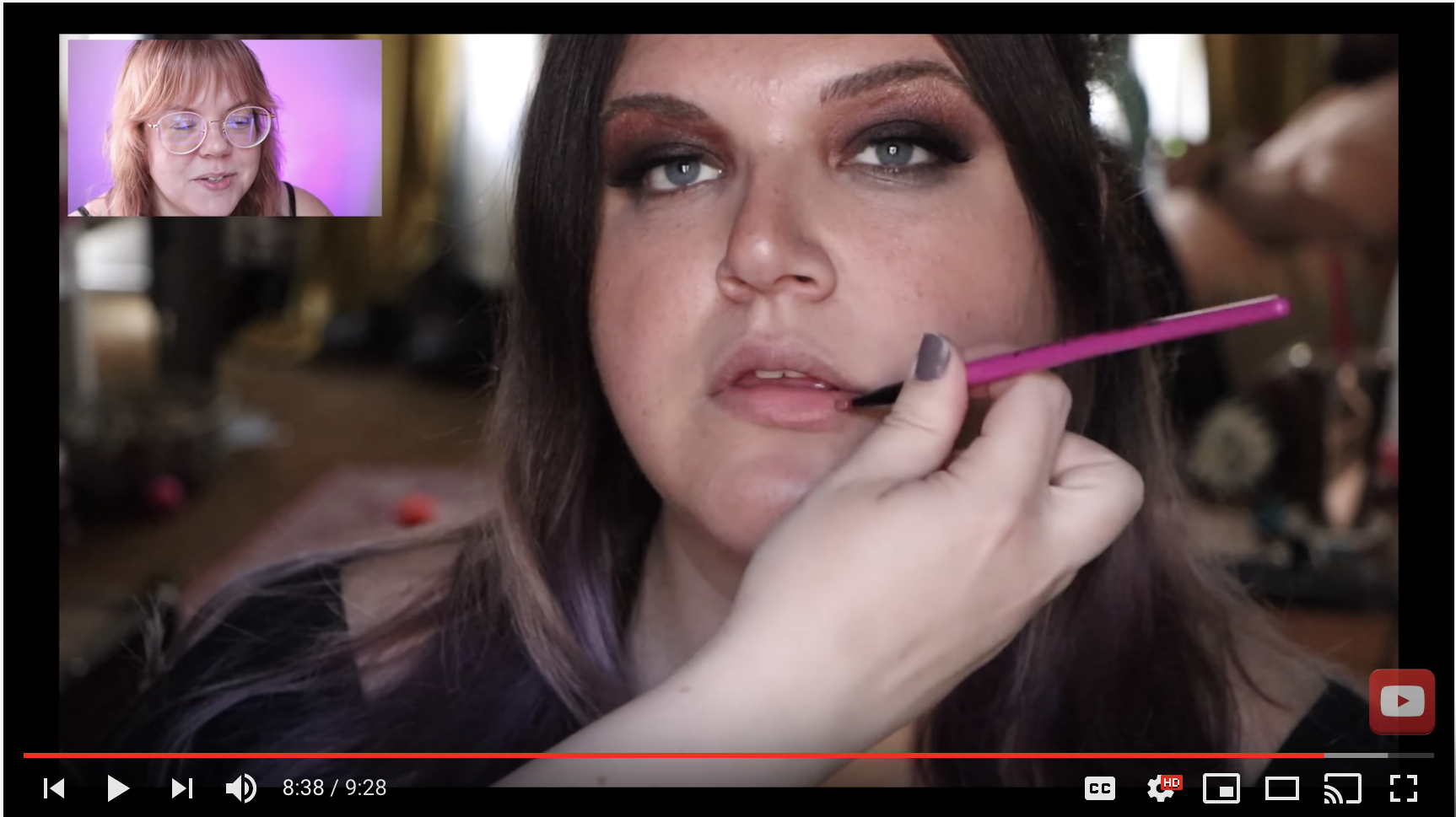 Yeah, while I am happy she's doing makeup looks, the last have been...not my style.

Better than clothing hauls though so I'll take it lol

Dead thread, i know, but she changed her channel name to "vintage or tacky/ Cora Diane" now.

Make up you mind already, lady.

Of all the beauty gurus and youtubers I've gradually become jaded with, Cora is the one that I'm most disappointed with. I used to really love her and enjoy her videos so much. I would respect her a lot more if she just did YT as a side hustle and got herself a normal job. Even if it's part time.
Top

She's done a 'My Truth' video....where she wallows in self pity for 40 minutes.

She says how she was grief stricken by her mother's death (mine died 2 years after Cora's but, you have to pick yourself up ...I had two children to care for so , wallowing wasn't an option).

She begged makeup companies to do collabs with her but, they weren't interested....apart from Too Faced who booked a dinner to discuss a collab but, stood her up. This was late in 2016....when Estee Lauder bought Too Faced. They went with Nikkie Tutorials who had more reach than Cora...and ripped Nikkie off! Cora should be pleased she avoided the same treatment!

She goes on to say that at PR events, people would ignore her. She only had about 300k subscribers...what did she expect? The bigger youtubers would have naturally taken the spotlight. It's not rocket science!


She kept trying to get collabs up to last year but, she says it's her looks and being 'fat' that has stopped her from being signed up.....Even though we've seen RawBeautyKristy and Patrick Starr succeed this year!

Cora has done maybe 7 tutorials in the last two years....how is she going to get collabs?

It comes across that she's bitter about not getting collabs but, she couldn't make her mind up who she was....she went off on a tangent doing plus sized clothing,,,,and changing her name!

...even smokey glow had got collabs.....because she WORKS to maintain her channel!
Stay home, stay safe & keep healthy

Yeah, I watched her "truth" video, and though my heart went out to her, I started to wonder whether much of her trouble in the industry stems from her own inferiority complex. Every rejection feels like a crushing, last-straw blow when you're already self-conscious, and already feel like you don't fully fit in where you are. I've only heard positive things about Natasha Denona and how she interacts with fans and influencers. I dunno, I wonder if ND was distracted by something or confused about the purpose of the introduction? (Cora said ND looked right through her until she heard Cora's subscriber count.) I wonder if Cora, so discouraged by repeated "failures," was projecting.

As for the Too Faced dinner ... yeah, it sucks to have a meeting canceled, especially if you're on your way to it. But to sob to the cab driver all the way back home? She set her expectations so fucking high that it sounds like every professional speedbump broke her very soul. Like, maybe this area of the fashion and beauty industry isn't for you? Maybe a giant collab or a collection with your name on it isn't the only result you should be after, deeming anything short of that an unjust slight? Of course, I'm sure her grief made her feel extra vulnerable. And no one should be asked to provide free marketing when the audience they built is the valuable commodity. I agree with her there.

But after a while of watching her video, I had the feeling that she feels terribly sorry for herself. And "poor, underappreciated me!" is not a path toward success, in career or in life. ... I think Cora is a kind and creative person. I hope she can find joy in her work again.
Top

If she'd have kept at it from the end of December 2015 (several months after her mum died) she would probably be where EmilyNoel is now with a million subscribers and a couple of collabs under her belt. She simply stopped doing tutorials, I was an avid watcher of hers and bought a few palettes after her recommendations. She had this sudden brainwave to feature clothes and fashion for plus sized women but, there were already so many good channels for plus sized fashion featuring the same brands. She should've kept at it with the makeup. No makeup company is going to be interested unless she brings in the views
Stay home, stay safe & keep healthy

Exactly, auntiflo. I liked her makeup content a lot, then it pretty much stopped altogether. Lauren Mae Beauty is similar, I think, to Cora. A one-time working MUA, also plus-sized with a "quirky" style. But Lauren uploads a ton, and her channel has a clear purpose and direction, so her sub count and views keep growing. Slow but steady. Cora never was another Jaclyn Hill or Desi Perkins, so comparing their trajectories with the brands to her own - no wonder she was perpetually disappointed by the disparity. She was unique, especially for the time. Something exciting was bound to happen for her if she'd have set a path and stuck to it, and perhaps been more open to other ideas of success. Maybe stop barking up the Too Faced trees and begging for scraps of attention at those awful industry parties.
Top

I feel like cora partly thinks she deserves certain things because she's been on youtube for a decade. Xsparkage is similar that way. Yet she's had several changes in direction that have set her back and confused new subscribers. She has seemed lost for years now.

I've always had a soft spot for Cora, but her "Truth" video really rubbed me the wrong way. It was all "pity me, poor me, people don't like me." I, like countless others, have experienced childhood trauma and trauma in my adulthood. But I got therapy and did my best to move forward. Quite simply, I didn't have the luxury of passive income like she, and many of these other entitled YouTubers. One week after my fiancé' committed suicide, I was back at work in the military. I was beyond depressed, however, I had a job to do and bills to pay. Wallowing in a room full of makeup would have been heaven for me. There was a period of time where I was having multiple panic attacks a day, and I still had to work functionally in a high stress environment! JFC, she doesn't even have to drive, her husband does it for her. I have little sympathy for someone has a live-in chauffer who she doesn't have to pay.

Cora pigeon holed herself in the plus-size community. Makeup is universal. Being plus sized is not, and that really limited her video prospects. I remember a period of time where I didn't watch her videos for nearly a year. Not because I didn't enjoy her content, but because it was all clothing hauls at places that I couldn't shop. Or plus-size mattresses/couches. If someone is so big that a standard sized mattress won't support their weight, maybe the problem is the person's weight, not the mattress.

Then she started complaining about money and how expensive the Bay area is when she chooses to live there. She complains that she can't buy a house, when at the moment, no one but the super rich 1% can afford to buy house in the Bay Area. Being a makeup artist and Youtuber isn't dependent on being in the Bay Area, look at RawBeautyKristi.

I really lost it when she revealed that she basically pissed away the opportunity of a lifetime, hosting her own TV show, because it didn't match the exact picture she had in her head. Talk about the epitome of privilege. I would have done both proverbial and literal backflips for that opportunity. If she didn't like the tone of the sizzle reels, why didn't she just talk to the show runners/producers? But it wasn't what Princess Cora wanted, so she said no.
Top Cora is a cautionary tale for all these "small youtubers" that refuse to face reality and crunch the numbers. They press on for years. Wasting tons of money and TIME (the most valuable resource of all), saving nothing, going nowhere. Convinced that they're going to make it and feeling entitled to that success as well. It's not realistic.

"Just work harder" or "Just do this other type of thing" isn't even the answer. There's a huge luck factor involved in reaching that level of influencer where you're making REAL money not minimum wage + a bunch of useless PR and a meaningless social media following. It's just like the entertainment industry where tons of talented hardworking people aren't going to make it, that's just how it is. When I see these younger "small" youtubers that are clearly investing a ton of time, energy and money into their "brand", just plugging along, it always makes me think of people like Cora. Cora is someone who didn't wise up and just get a real job and now she's middle aged with nothing to show for it and she's miserable. At least she says she's going back to school finally.
Top

Totally agree with you panda_protector! Youtubers who concentrated on beauty back in 2012-2013, made it big! Now, youtube is overrun with people and their beauty channels, hoping to be the next Jaclyn Hill/Tati/Nikkie Tutorials
Stay home, stay safe & keep healthy